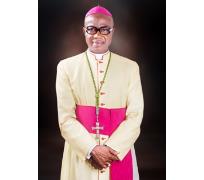 Introduction
Upon his consecration in 2003, Archbishop Val Okeke chose “Ut vitam habeant” (That they may have life) taken from John 10:10 as his motto. This year 2015, we are happily celebrating his twelve years of giving life, hope and a bright future to millions of Nigerians, including Catholics and non-Catholics as the Archbishop of the Catholic Archdiocese of Onitsha. In this short piece, I will be reviewing his visionary investments into the future of our society. In giving life, one ought not to look at what is already in place and maintain it; one must go further to create new avenues to broaden opportunities for the future generation. Archbishop Val Okeke has invested in not just the future of the priests who are under his care, but he has also invested in the lives of our youths, the political class and our society in its entirety. Indeed, he is an apostle of love, life and visionary investment which is aimed at improving our society and making our future brighter.
Investment in the Educational Sector
In his many sermons, the Archbishop has reiterated that the youths are the reason why a society strives hard to get better and when we don’t give them conducive environment for learning and self-development, we will end up building the physical structures of the society only to be destroyed by individuals who lack the requisite skills to maintain them. The vision for the Holy Family Youth Village was conceived by the Archbishop and in 2009; the gigantic hostel blocks were opened to house the students of Nnamdi Azikiwe University (Awka Campus). The hostel has 24 hours internet connectivity for research work and learning. With about 1,200 rooms, the students who are residing in the youth village have continued to break records in the university and are always emerging as the best students in their divergent departments.
The Holy family Youth Village is a visionary investment of the Archbishop into the lives of our youths. He saw into the future and realized there was need to train people for a better society. In his article titled “Youth Formation, productivity and future of the society”, Prof. Boniface Egboka while referencing the 2009 pastoral letter of the Archbishop on Youth Education: Our Greatest Legacy, stated that; “Outside the youth, there’s no future.” This statement is self evident because any society that neglects the proper formation of her youths, always need up with catastrophic consequences. The Archbishop, through God’s illumination and grace, gave the youths of Nigeria who will have the opportunity of studying in Nnamdi Azikiwe University a befitting residence to mould them into desirable materials that will take our society to El Dorado.
When the leaders of our society saw the massive positive impact been recorded by the Youth Village, they called on the Archbishop again to do more. This time around, His Grace saw into the future and made it clear that building hostels was not enough; something more has to be done to secure the future of these young people. This led to the vision for the creation and on-going construction of the Shanahan University of Science and Technology (SUSTO). This time around, he wants our young people to have a holistic formation that will be deeply rooted in the fear of God, love for mankind and academic excellence.
Archbishop Val Okeke is a lover of the youth and this factual statement cannot be over-emphasized. When you visit his official personal website at http://www.archbishopvalokeke.org , you will be amazed with the way he tells his story to the world and how connected he is to the younger generation on virtually all social media platforms. A lover of children and the youths, these twelve years of visionary investment in our lives is a testament of his gospel of love in giving life to our society.
Still keeping with his investments in the educational sector, about twelve priests were sent abroad last year to various parts of Europe and Asia to study. Now there is something unique about this particular investment in the future of our priests. Most of them are studying medicine, pharmacy and other courses that are not directly related to religion and you may wonder why this decision was taken. The rationale is very clear; in a dynamic world like ours, His Grace comprehends perfectly well that for a healthy mind to be in a healthy body, a healthy pastor of the soul must be involved in the process. Hence if a priest is an internationally trained and recognised medical practitioner, he will be able to draw more souls to God through his gospel of healing the sick. What other miracle is greater than this?


Rev. Fr G.E Adimike perfectly summarized the visionary investment of the Archbishop in his Introduction to the book; “True Heritage”. He stated thus, “It is blissful to imagine a society in which the super-abundant energy of the youth is successfully harnessed (by the Archbishop) for national development.” With all these investments in place, there’s no doubt that the future of our youths who are open to learn and grow under Archbishop Valerian Okeke is well protected and secured.

Investment in the Media
Pope Francis stated at the beginning of his papal reign that the media is one of the greatest mediums through which the gospel of Jesus Christ can be preached to the whole world. Television, radio, internet, print media, etc are divergent ways that people can be initiated into the everlasting love of God in order to become worthy ambassadors of his kingdom. The Archbishop, in his usual nature of spreading the gospel of love and grace, initiated the vision for Radio Sapientia Onitsha. If the people of God are entertained with the word of God and are made to know the happenings in their society through a reliable source, they will be more focused in making life better for themselves and our society as a whole. Radio Sapientia is the number one radio station as far as Anambra State is concerned. The frequency at 95.3fm can be received far and wide both within and outside the state and the morning show of the radio station is a hot cake. Buses, cars, keke napeps, gas stations including our Hausa brothers who may not comprehend the Igbo language often used in the programme, love tuning in to listen to it. What other magic is better than giving your people a voice and platform to be heard? Keep in mind that the radio station is not exclusively meant for Catholics alone.
Investment in the Oil and Gas Sector
Nigeria is a very peculiar country with its own problems. And when it comes to the issue of oil and gas, the sixth largest producer of crude oil in the world have little or no positive note to write home about. Many stories abound where our people have been cheated in the process of refuelling their tanks. Some dastardly businessmen even go to the extent of mixing omo and water to increase the quantity of their product without taking into consideration the implications this would have on the vehicle or the person driving it. Could it be said that these men have love in them? Indeed, the Archbishop stated in his 2005 pastoral letter to the people of God titled “The Measure of love” that love is what will transform the world into a true universal brotherhood.” It then goes without saying that if these men had love in them, they would’ve treated their customers as their own blood and in no distant time, our society will be enveloped by men and women of goodwill who will love their fellow human being with all sincerity.
Troubled by these experiences encountered daily by the people of God, our visionary Archbishop initiated the renewed idea for Oluchukwu Oil and Gas, an O and G company that will carter for the needs of our society. If you’ve visited the station at Basilica of the Most Holy Trinity Onitsha, you will quickly come to the conclusion that where love is involved, even business rigmaroles is defeated. They are attended to with a welcoming smile and provided you settle your contractual obligations very well, you will be leaving the premises of the gas station with renewed happiness because you know nothing will happen to your engine or fuel pump. Indeed, with grace and love, all can be achieved.
Conclusion
As we celebrate the 12 years of Episcopal consecration of Archbishop Valerian Maduka Okeke, we pray God to continue blessing and keeping him in sound health of mind and body. Above all, he will continue to shine the light for a society that will be filled with God’s love and grace. These twelve years of visionary investment into the lives of our youths, priests and society is a testament of the fact that he has come to give life in abundance. As the youths whose faith and hope for a better future have been renewed through your investments, may God sustain this vision for generations yet unborn.
Happy 12 years anniversary Your Grace!