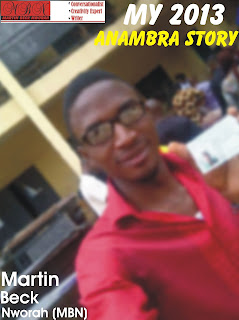 One of the many beauties of possessing a voter card is that it also gives you the full fledged confidence to engage in political discussions knowing that you are eligible to add your vote when the time comes. Whether it counts or not as a result of the institutionalised rigging in the polity, you can be rest assured that you are better than thousands of people who would rather make noise and hide in the corners of their room on the day of election. Of course, you know people who make noise and have never voted in their entire shouting life about bad governance.

In 2013, I voted in my second election as nwa Anambra. By stroke of fortune and life’s happenstance, I voted in the general elections of 2011, the governorship election in Anambra state in 2013 and the general elections of 2015. By 2017, it will be the fourth time I will be voting in an election and still in my early twenties. So here, Martin Beck Nworah humbly wishes to tell the short story of 2013 and how it went down from my own personal eyes.

What caught my attention to the build up of the state election that year was that over 1.7 million people were duly registered to vote but the total number of valid votes stood at a little above 400,000 thousand people. What happened to the 1.3 million others? Have they travelled, died or just suffering from the same disease that made many of us not to vote in 2015? That disease is the disease of “I don’t care”.

Prior to the morning of November 16, 2013 which happened to be the Saturday for the elections, I had campaigned vigorously for one of the political parties. It was easy for me to find young like minds who believed in being a strong part of the polity and we worked hard to give our best. As it is with every struggle in life, it was a bitter sweet experience but we enjoyed the process. At one point, I remember on invitation, I visited the deputy governorship candidate of one of the parties in the top four that year. The security men at the gate kept me waiting for more than one hour because this little boy cannot be looking for our oga. Thank God for his P.A who later came out after a barrage of phone calls and rescued me from being slapped.

A greater percentage of my campaigning was done through my vast social media outlets online, universities (Awka, Uli and Igbariam) and hangouts (Onitsha, Awka, Ozubulu and Nnewi) where young people always converge to discuss issues of interest. Although at one point, I had the special privilege of addressing elders, I totally enjoyed the entire process. One trait I observed was that ndi Anambra are politically aware of happenings in the state but are always lukewarm to vote.

On November 16, 2013, one of the things I noticed was the little argument and chitchats between different agents of the political parties who were angry at their peers who collected money and never had a voter card. Some were even shouting that many of those people were not even registered voters in Anambra state as they were registered voters in their own state. I was shocked at such level of dishonesty and outright rip-off given the huge money these candidates expend during the electioneering period. I hope they will be careful in who they listen to and who they invest in this period.

As the accreditation was ongoing, one of the agents of a political party approached one man and nearly exchanged blows with him. What was the issue in contention? The said man had collected recharge cards (200 naira unit of different networks) above 30,000 naira and promised to share it to a particular demography in the field that morning. But the man soon disappeared and only appeared during accreditation claiming he had distributed the cards. While observing all these things, Martin Beck Nworah was busy with my network of friends through calls and chats to make sure they are on ground and they have called the necessary people.

When the voting started at around 2pm in the afternoon, many people who were accredited never came back to vote. Some of the polling agents had disappeared with the monies meant for people in their polling unit and the elderly people who managed to be patient had no idea whether it was umbrella, okuko, family or broom. Suffice it to say that some people were not patient enough to vote. Many even left the line after being lobbied by almost all the serious political parties on ground without actually voting.

After casting my vote and towards the tail end of the voting process, I was shocked to realize that many of the people who collected materials and other things to share to the people were never accredited and never voted. I checked the left thumb of some of them to see the ink on the nail but saw none. Although it may be argued that they might have done their job without actually voting but from my observations working there, they did nothing except carting away the materials. I voted and I was making noise on the line to attract the attention of those who I was lobbying to see that I was actually voting. It made many of them to stay back till it was their turn to cast their vote.

Another Anambra election is around the corner by next year and the circling has started. Martin Beck Nworah hopes some of the mistakes done by different candidates both in their strategy and choice of people to work with them will be corrected.