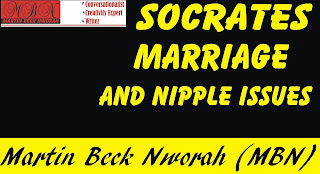 Socrates, the ancient Greek philosopher reportedly married Xanthippe, a lady more than 40 years younger than him. Yes he didn’t only say wise things; he had a libido that needed satisfaction too. But Xanthippe had a very bad attitude and at one point, it was reported by historical scholars that she poured a jar of water over Socrates and the philosopher instead of boiling over and dealing with her said; if I can withstand her, I can withstand any human being.

Against the advice of his wise friends who insisted he sent her home with philosophical quotes, Socrates still remained married to her because he is the one in the marriage and not his friends. Of course many of them were single because hardly did any woman of that era understand why a grown man will spend a whole day sitting with his fellow men and philosophising.

Socrates knew he was the one married to his wife and not the friends. So he made an independent decision and stuck with it. With his example, it became clear that many times, it makes no sense taking advice from single people. No matter the outcome of the marriage, it’s your choice whether to stay or leave. This will lead to the second point about marriage.

Social media is daily filled with teenagers and young single adults who have the perfect opinion of what marriage is. Let me, as Martin Beck Nworah, state that I am not writing this piece to advise married people, not at all. I am writing this to plead with my fellow single people to keep shut till they experience marriage. And by experience, I mean getting married and waking up to the same face for the rest of your life. If Socrates had listened to popular opinion, he would have divorced his wife but he knew what he was experiencing and he elected to remain in the marriage.

For married people who take the opinion of their single friends and seek advice from them on vital marital issues that demands experience, I pray you stop. No matter how knowledgeable one is, times have proved that experience is always the best teacher. You have parents, mentors and matured elders who have weathered the storm of marriage, reach out to them. Not your single girl friend that gets hundreds of likes on her copy and paste article on marriage.

Forget the popular marriage posts on social media that get many likes; popular opinion is not always the best opinion. Your life and family is quite unique and different from others and when you begin to compare, your problems begin to crop up. This also leads to the third issue, nipple issues.

I actually didn’t have anything to say concerning the nipple, just wanted to tell men to leave the nipple and breasts for babies. Thank you Sirs for your understanding.