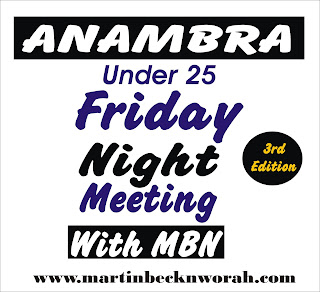 Welcome to the 3rd edition of our e-meeting.


Tonight, I want to discuss a very important issue with us. When you are assigned to do a job with someone else or a group of persons, do you take glory for it all or try to show you worked even when it is clear you did nothing?

In 2015, I was given the task of writing a very long article/response to a letter. I was assigned the task with a young lady who I so much believed had the capacity to execute same. When we got to our meeting table, she stated clearly that she was having pains and will not be able to contribute. It was almost 11pm in the night. So I excused her, went to the table and stayed up all night. When I was through with the writing around 5am, I decided to take a nap and await our director. While napping, an unusual sound woke me up..."is it not your laptop? Are you not the one who wrote the stuff? Unlock your laptop let me see the work you have done since Beck decided to sleep. "

I jumped up from the bed and shouted like a man who was hit by a meteor. Looking at the table, I saw the young lady's writing pad, pen and phones beside my laptop. Having gone to sleep before I started typing, she didn't know my device was on lock. And because I had no personalizations on the device, she could've easily claimed to be the one who did most of the typing because her writing pad had sketches I didn't even know how she managed to come up with them. Since then, I became afraid of working in a group or with people who I have to generate lots of creative ideas for.

If you are a young person reading this from Nkpor, Obosi, Awka, Nnewi, Onitsha, Omagba, Nise, Agulu, Ekwulobia, Nsugbe, Oko, Ozubulu, etc; it is not noble to steal the work, whether intellectual or material of another person as your own. It is extremely condescending and speak volumes about your shallow mental attitude. To be great, you do not need to take credit for the job of another when you didn't employ or contribute anything to the success of that venture.

As Anambra youths, we are trend setters and cannot be seen as second class citizens. In whatever you do, give it your best and stand out. Don't take credit for the job of another person and make his efforts go to waste. Everyone loves to be recognised and appreciated.

See you next week.