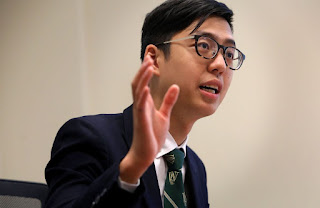 The 2nd US presidential debate may have come and gone but one guy who has left an indelible mark in my intellectual reservoir is Kenneth Sng, the student body President of the Washington University where the debate was held. I listened to the Singaporean foreign student speak for two minutes before the commencement of the debate between Trump and Clinton. Truth be told, I became ashamed of myself, the universities we refer to as the Ivory tower in this nation and the bunch of students we elect as our leaders here in Nigeria. At some point in my academic pursuit, I was elected and I was a part of them.

Pushed to know more about Kenneth Sng, I visited the students body official news website and I was blown away by what these students achieved prior to the debate. Kenneth, together with his fellow student leaders, raised funds and conducted mock debates for students who supported the Republicans and their Democratic counterparts. I read with enthusiasm, the detailed analysis of how these students are transforming their lives, through real life opportunities they are creating for themselves through the system. It made sense to call the Washington University, an ivory tower in every sense of the world.

I was truly challenged and of course, you don't need any further answer as to why people seek for "better education" abroad.

Coming back to our usual Nigerian narrative, the case is quite the opposite. How many student leaders can confidently address a class of 100 students? Kenneth Sng addressed  the world in two minutes and was apt in his presentation. But I bet you my primary school leaving certificate, many student leaders in this country can't do that in 3 hours. They won't be able to communicate in clear terms what they have in mind even if you give them 10 hours. Asides being a minus for our academic system here in Nigeria, it is also a wake up call for young people to try and improve themselves. This is what we are talking about when we make reference to being prepared for future leadership positions. Not learning how to fight over transport money and refusing to graduate.

To say that the authorities contribute a great deal to this malady will be over emphasising a notorious fact. In fact, in one of the universities in the Eastern part of this nation, an institution that prides itself as an ivory tower has retained an inept female individual as her students body leader. The amount of dereliction, insults and intellectually unsound decisions that this bundle of leadership failure has heaped on the said institution goes unnoticed with the waive of the hand because she is dancing to the tunes of her paymasters. This same individual ought to have left the university but it begs the question why she is still being allowed to address herself as the student body President in an institution where the students never for one day, gave her their approval or support to lead them. 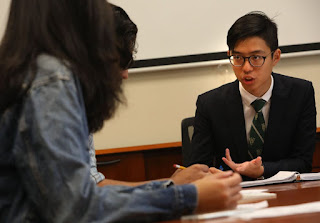 Today, Kenneth Sng and his fellow young leaders at Washington University have shown that young people can get into leadership positions and impact positively on their environment. I believe so too because when I had the opportunity to lead in my little capacity, I gave it my best shot and public opinion vindicated me on several occasions that I took the right decisions and performed way above average.

If young people especially student leaders are to make any positive impact in this society, the authorities of the universities must actively aid in training and picking good students who will confidently speak and defend the honour of what an ivory tower truly stands for.

Please, I don't want to talk about NANS. It's a national shame on every key stakeholder in the education sector of this nation.