Martin Beck Nworah at Blaze FM for a tour and interview 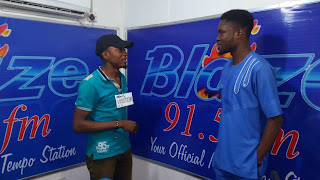 I visit media houses from time to time on invitation but the treatment I got from Blaze 91.5 FM was totally out of this world. They made me feel like a mini celebrity and showed me what a standard corporate organisation should be like.
Immediately I alighted from the car, the elderly gateman welcomed me and gave me a visitor's tag to put on. The Head of Admin, Mr. Emeka Iwuamaeze welcomed me warmly and I waited for my interview at his office. While the air condition was chil...ling me, I was served with coffee but I opted for tea and biscuit which was promptly brought. 15 minutes later, Alex Otutu, the ever blazing OAP escorted me to the wonderful and stylish studio where he conducted my interview. Truth be told, Alex is an enigma. He dug deep into my page and brought up my life stories. I was totally mesmerized and impressed. 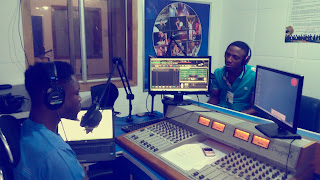 After the interview which lasted for about two hours with music and talk, the head of Admin took me around the station and explained in details what the Blaze media brand has in stock for the future. I was blown away. This is a media company with focus and direction to take over the industry.

I received some official souvenirs from the station and I was driven home in the official station Toyota SUV. This is saying a very big thank you to the guys at Blaze FM. 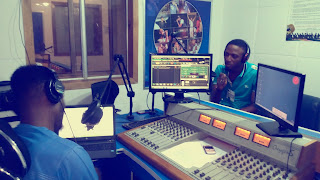 Till we get to the Promised Land, I shall be waiting for when you will pass me a glass of water and thank God for the gift of grace for the race.
MBN.