My Grandfather, Willie Obiano and my unborn children 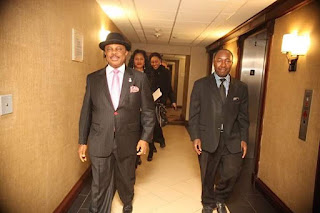 Eze Amulunaobi, my maternal grandfather is one man who taught me like I was 50 when I was barely 5 years old. During those periods especially in '97, '98 and '99, I sat at his feet during the umunna meetings and listened to whatever it was they were saying, even though I understood nothing. The elders were thrilled by my child-like inquisitiveness and often allowed me to stay with them. One day, I asked my granny, "why do you people answer different names from your usual names? I want my own name asides Martin Beck Nworah." He smiled and called me "Ichie". His fellow elders started calling me Ichie and at that point, I stopped shaking ladies or playing with my fellow female kids. My siblings had a good laugh with my stupidity because I thought I was now a village elder. That singular honour by the elders taught me respect for age, value for our culture and tradition as Igbos and the need to sustain this system. Although as an adult now, I have my reservations towards taking multifarious titles from different villages and confusing oneself along the line.

In the past, I have often stated that I don't fancy the governmental policies of Chief Willie Obiano and I still stand by my words till I see practical reasons not to. But that notwithstanding, I will still vote for him in 2017; at least for now. I am saying this because at this point, I have not seen any reasonable opponent who can stand tall and give ndi Anambra a reason not to vote for him.

I visit hangouts, schools, markets and join youths in chitchats; everybody is lamenting about the inaccessibility of this government on so many levels because of some overzealous aides that surround him and allow him less space to freely mix with his people at social functions and visits to towns and villages. These people should at least give the governor some free association as no one is aiming to assassinate him yet. I have been at a state event where an elderly woman was waving at the governor and shouting his name. These aides shoved her aside but the governor was looking in that direction so he motioned on them to allow her. Imagine the stories this woman would've told her village people about the governor if he didn't see what his details did. Pope Francis example should also inspire the devout Catholic Obiano who is also a "Crowned Duke" of the church to reach out and connect with his people. The people feel this government is not doing bad in juxtaposition to the current economic and political realities in the country. And their stand is still the same; if we don't find a better alternative to Obiano, we shall vote for him again.

I respect Chief Willie Obiano and what he has been able to achieve in his private life. If I am to criticize him, I will do that based on his performance as the governor of this state and not what he does behind as a family man. This idea of young people coming to the internet to call a man who is old enough to be their father a drunkard is really condescending to say the least. And they often do that with very bad grammar and unedited pseudo political diatribe that makes you wonder if they have parents at home. Will they be happy seeing a fellow Igbo man or woman call their parents such names? That's if their own parents ever achieved anything that is notable in our society. We have a strong system of values and tradition as Igbos and what the Americans do should in no way scuttle this system. If you don't like the policies of a man or how he runs the government; attack it squarely, leave out his private life and vote him out at the polls. Nobody is a permanent owner of the government at all levels except the people. Meanwhile, do you have a registered voter's card to do that? "Abi na social media card you get?" 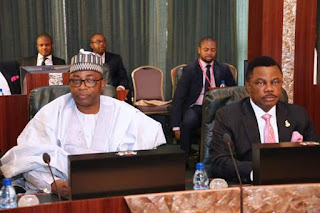 To my unborn children, whenever I will come online and see you directly insulting your elders on social media, you will be in trouble that day. You will explain where all the home training you have been receiving over the years has gone to. Around here, if you insult a man, the more people will love him and even give him mercy votes. The stronghold of the church and forgiveness is deeply rooted in things you never thought they would.

As young people, we should not join the elders in pouring dirty aspersions on one another. This is exactly what they did to themselves and look at the sorry state they have kept our nation and state in. Do you really want us to continue in that light? If we must make informed contributions and influence a change of the system from the status quo, we must prove beyond reasonable doubt that we can constructively engage the powers that be on key issues in the polity. And if we continue to fool around, singing praises blindly and don't define our position, they will always play us. Is that how we shall lead this nation and state?

I casted my first vote at the general elections in 2011 and followed it up with that of 2013 in Anambra State where I voted for APGA(we all voted for the party and not solely the individual because we wanted to keep "our party" in power. I  will still insist that I don't take a fancy for my governor's policies and I believe my readers are well informed to comprehend my reasons from my previous articles on this subject matter. But I will still convince my friends and everyone I can influence to vote for him(Obiano). That decision to vote for him will change the very instant I see a better alternative to his mantra and candidature. For now, no capable person within the purview of the realities of governance in this state today has indicated interest to perform a Fayose on a Fayemi*.

*Ayo Fayose is the current governor of Ekiti state who won Kayode Fayemi at the polls after the later finished his first tenure as governor of the state.

1 comments My Grandfather, Willie Obiano and my unborn children