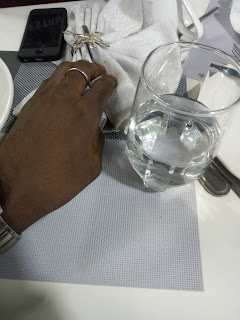 I heard her boyfriend of 3 years plus had engaged her about 11 months ago and nothing has happened till date. The engagement was a rumour to me because I've not seen her till that evening of the cocktail party at the hotel.

I was arranging the glasses when I sighted her at the entrance, waiting to present her pass so she could gain entry into the hall. My friend is a beauty to behold, if there's any award Martin Beck Nworah should get, I deserve that of ...anyway...never mind.

I hurriedly walked to the entrance, beckoned on her to come forward and I walked her into the hall. The party won't start till 7:30pm so I went to a corner to catch up on life, with her.

She apologized for not always keeping in touch and blamed it on her busy schedule and job. She came for this party because one of her female friends would be getting engaged here. They said its a surprise engagement but all of us in the inner circle know there's no surprise about it.

I looked at her left hand and saw what I believed was her engagement ring. I congratulated her on getting engaged and she brushed it off.

"Engagement of over 6 months, Martin Beck please respect yourself with that congratulation."

I asked her why she didn't stop wearing the ring since she's not happy with the state of things, having not tied the knot till now. She shook her head and told me its more complicated. She can't just imagine losing this guy after all the years they've spent together. She is just there, hoping the guy would do something after making one promise after another.

"How open are you to meeting new people?" I asked her while smiling like a devil's advocate.

She said she wasn't really sure because she's already engaged. I laughed hard. I definitely knew she needed a little push.

"Here's the deal my lady friend, I have one VIP pass for this party because you already know I have links with the person celebrating today. I am willing to give it to you because I have found somewhere better to sneak and enjoy my evening. He has a couple of single guys coming over because I vetted the list of invited guests with his wife. So you will do me the favour of putting that keyholder in the name of ring inside your purse till the end of this party."

We laughed, I gave her the VIP pass and was about walking away when a thought came to my mind. I turned, removed the ring from her finger myself and put it inside my pocket. I told her I would be back before the end of the party to give it back.

I knew her type of person. If I didn't remove that ring, she will leave it there.

When I returned after the party, she was smiles and excited. She told me about two amazing guys she met at the party and how lively they made her night.

"Madam did you collect number?" That was my own interest.

She laughed and said the two guys collected her number separately. I gave her a few advice and told her to just open up a little bit. For all we know, nothing is certain yet about her engagement to that other guy.

Two weeks ago, she called me and told me that one of those guys took things serious with her and she's liking the way things are going. They've been seeing for nine months now and he is giving serious hints about marriage.

I told her to pray about it and follow through. Three days ago, she told me the guy proposed to her and she accepted. A date has been fixed for the wedding and every marital engagement to be concluded within 5 months.

"How about your former engaged guy?" I asked her.

She laughed hard and told me that one called her one day to come over to his house and she felt it was time to plan the wedding. On getting there, the young man told her they needed to take things slow and not rush. It seemed like they were in a hurry, he said.

I laughed out hard. Someone you've dated for so many years, it's now you know it is important to take things slow?

She told me she calmly thanked him for everything and dropped his ring or keyholder as she nicknamed it on his glass desk before leaving. Three days after that, her friend working at a hotel somewhere in town told her the fiancé had been lodging in that hotel on so many occasions with different ladies. When she couldn't bear to keep her mouth away from what's not her business, she had to tell her. That was a confirmation of her thoughts all along.

I was just laughing. So I asked her the moral lesson she learnt from everything that happened. She smiled.

"When going for a cocktail party, drop your keyholder ring at home."

If you are not sure, don't block out your life's options.