The Friend I Never Had 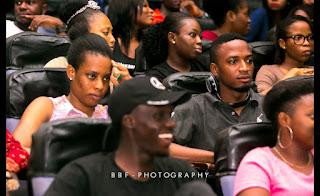 If it was someone else, I wouldn't have given it a second thought. But this is my friend, my guy. We used to encourage one another that things will get better. Even when I'm down on cash and he is broke, I still manage to send him small change to eat. We cried and laughed together. He was my brother with a different blood.

About six months ago, he finally got a job and all of that changed. He began to show Martin Beck Nworah that I am no longer on his level. I would call, he'd tell me to call later in the evening that he was busy with work. I'd still call later in the evening and he will tell me he is tired. Gradually, I watched my friend slip through my hands into the corporate world of his new found friends and lovers.

But that day, I couldn't take it any longer, my heart was already heavy seeing his pictures where he is living the life on my WhatsApp status. So I called him and begged to see him, even if it's just for ten minutes.

He agreed to meet up at a hotel somewhere around town. I told him I couldn't afford to buy even a bottle of water there and he said no problem. He will take care of everything.

From the balcony of the hotel, I saw him drive in. I was surprised; when did he buy a car? He alighted from the car and held the other door for a lady to alight. It was one of our mutual friends. Haba, when did she start dating him and no one told me? Well, when you're not making it, things move fast behind you.

I was trying to be strong, but my heart was heavy.

When we all sat down, I told him this conversation was between us. Let his girlfriend occupy a different position till we're done. He refused and insisted the lady must be there, like it was a plot to humiliate me further.

I congratulated him on his new car and he said it was gotten on loan. I was surprised. How can you rush to get a car just few months into your work when you don't really need it? And you even took out a loan from your company. Well, it's his life.

I appealed to him to consider me too. I needed help too. When we both had nothing doing, I encouraged and helped you. We promised to have each other's back but now you're making it, you just relegated me to the background.

He was just chewing gum, checking his gold wrist watch and looking around.

I have become an insignificant being before him. Even his new girlfriend, a lady who relied on me for most of her basic needs had no reason to look at me. I became utterly disgusting to them.

After a while, she whispered something to him and he brought out his debit card. "Book the usual room" he said as she walked towards the hotel reception.

I have had enough. As I got up to leave, a thought struck me. I sat down, called his name in full and looked him straight in the eyes.

"Those who are lucky to have their kernel cracked by a benevolent spirit should always remember to stay humble."

I told him the truth of his job.

On a good evening about six months ago, we were chatting and he told me about a particular application he made for a job. The CEO of that company was the husband to my friend but I didn't tell him. I knew he wanted the job so bad and I knew I had to do something.

Over the course of two weeks, I wrote about seven mails to the private mail of the man and also reached out to my friend. She agreed to do something since I could vouch for the guy. He got the job.

I showed him the emails, chats and a screenshot of our conversation that evening before I reached out to my friend on his behalf.

He bent his head.

When the girlfriend returned, nobody was speaking and she was surprised at our weird silence.

I thanked him for the time and walked away. As I got to the staircase, I made for the reception, collected a nylon from the receptionist and returned to his table.

I packed up the remaining chicken and collected the can of malt his girlfriend refused to drink because in her words, it was too local. "At least my dinner is sure," I told him as I walked away.

While walking back to the bus stop, he drove out of the hotel and made for the opposite direction. Did he abandon the coitus he would've enjoyed that night?

Later that night around 10pm, he sent a message requesting for my account number. I hurriedly sent it to him. After about 7 minutes, I received a credit alert of 10k from him. I called and thanked him immensely for his generosity. With that money, I am sure of eating for about two months.

He later apologized for his behaviour and said if he knew I was the reason why he got employed, he would've treated me differently. But does it matter now?

In this life, when you want to help someone, just do it because you want to do it. Many times, the hand you lifted up won't remember the pain you passed through to keep it up.

Keep doing good, your day will come. Your efforts in this life to make others happy shall never be in vain.

8 comments The Friend I Never Had